The U.S. economy has been in the expansion phase of its business cycle since the second quarter of 2009—the end of the Great Recession a decade ago.  An expansion is one of four so-called phases of a business cycle; the other three phases are peak, contraction (aka, recession), and trough.  The business cycle refers to irregular fluctuations in aggregate economic activity that are reflected broadly throughout the economy; so, for example, a decline in automobile-manufacturing, tax-consulting, or software-engineering activity does not, by itself, constitute a contraction.  In Figure 1, I illustrate the phases of a (very stylized) business cycle, which oscillates around a long-run growth trend indicted by a dashed, red line.  (For more on long-run growth, see the Morning Macro segment, (Iron) Curtain Call.) 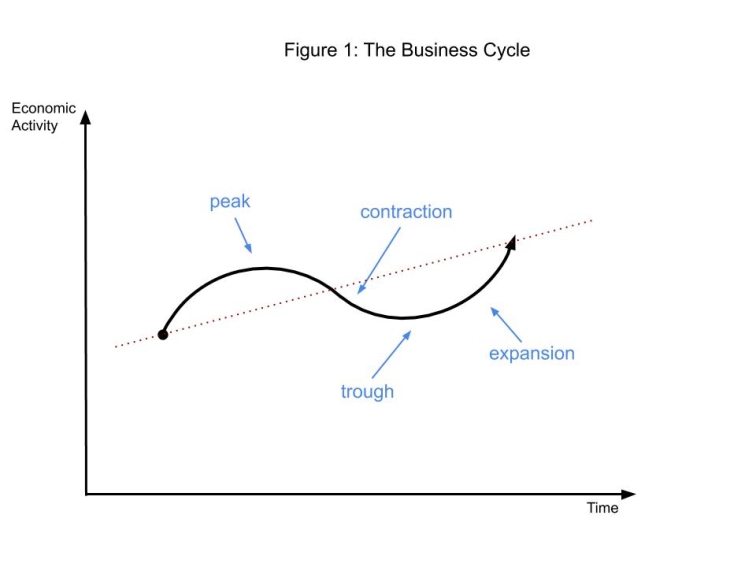 The National Bureau of Economic Research (NBER), a private, non-profit, non-partisan research institution located in Cambridge, Massachusetts, is the source of the information in Table 1.  Macroeconomists look to the NBER Business Cycle Dating Committee to identify peaks and troughs—and, thus, expansions and contractions—in the business cycle.  The NBER Business Cycle Dating Committee describes its method for dating a peak or a trough this way:

The Committee does not have a fixed definition of economic activity. It examines and compares the behavior of various measures of broad activity: real GDP measured on the product and income sides, economy-wide employment, and real income. The Committee also may consider indicators that do not cover the entire economy, such as real sales and the Federal Reserve’s index of industrial production (IP). The Committee’s use of these indicators in conjunction with the broad measures recognizes the issue of double-counting of sectors included in both those indicators and the broad measures. Still, a well-defined peak or trough in real sales or IP might help to determine the overall peak or trough dates, particularly if the economy-wide indicators are in conflict or do not have well-defined peaks or troughs.

According to Table 1, since the Second World War, the U.S. economy has experienced twelve expansions.  Of these expansions, the shortest occurred during the period between the trough in July 1980 and the peak in July 1981; this seemingly brief interruption in contractionary economic activity—from February to July, 1980 and from August 1981 to November 1982—exemplifies the informed judgement inherent in the NBER’s approach to dating a business cycle.  To be sure, in describing its cycle-dating method, the NBER calls out this expansion in particular, writing, in part:

The Committee…has no fixed rule to determine whether a contraction is only a short interruption of an expansion, or an expansion is only a short interruption of a contraction. The most recent example of such a judgment that was less than obvious was in 1980–1982, when the Committee determined that the contraction that began in 1981 was not a continuation of the one that began in 1980, but rather a separate full recession.”

Why the current expansion has been so weak is, well, complicated; though, the source of the weakness surely has something to do with the severe financial crisis that preceded the expansion.  Financial crises tend to leave a mark.  To be sure, the deterioration in economic activity that the Great Recession left in its wake was exceptionally severe, the worst since the Great Depression; though the Great Depression was an order of magnitude worse than the Great Recession—the subject of a future Morning Macro.  In Figure 3, I illustrate the loss of real GDP associated with each of ten Post-WWII contractions—those adjacent to the expansions that I identify in Figure 2.

Okay, so are business cycles uniquely American?  No.

The general features of business cycles—relatively long expansions, relatively short contractions—are common to all market-oriented economies, in which aggregate shocks (including, potentially, macroeconomic-policy shocks) buffet economic activity for better and for worse.  In Table 2, I report the average lengths and counts of business-cycle contractions and expansions since the 1950s (or the soonest thereafter that data are available) for a selection of countries, including the U.S.; I base this information on the Organization for Cooperation and Development (OECD) recession indicators, which offer a consistent measure of business cyclicality, even though these indicators may signal a business-cycle turning point more often than other indicators, such as those unique to each country’s official statistics agency.  (Australia comes to mind; more on it below.)

So, is the current U.S. expansion old, or just older?

To be sure, the current U.S. expansion has been unprecedentedly long, by U.S. and international standards.  Consider, for example, Figure 4, in which, for each country listed in Table 2 that is currently in the expansion phase of its business cycle, I illustrate the time path of the expansion in relation to the level of real GDP that the economy registered in the trough that preceded the expansion.

In Figure 4, the current U.S. expansion (indicated by the thin, light-green line) is the very same (dark-green) line that I illustrate in Figure 2.  Of the countries listed in Table 2, those countries in the expansion phase of the business cycle include, along with the OECD dates of the latest trough, Canada (February, 2019), Japan (October, 2018), Sweden (December, 2016), the U.K (April, 2018), and, of course, the U.S. (June, 2009).  Though, to be fair, if we overlook the relatively mild, short-lived tendencies toward recession in Australia over the last quarter century, tendencies that cause the OECD indicators to signal recession in that country, Australia’s economy has experienced a business-cycle expansion for about the last twenty-seven years.  In any case, the current U.S. expansion is older than most; but, is it old—as in, soon to expire?

In principle, expansions do not die of old age; they’re murdered.

The intellectual history of business-cycle theory is long and rich.  Much of it begins with John Maynard Keynes and his General Theory of Employment, Interest, and Money, published in 1936; the timing of the publication with the Great Depression is not coincidental.  According to Keynes, fluctuations in macroeconomic activity are largely caused by aggregate shocks to the economy that are independent—or, exogenous—of its structure, including its phase of the business cycle.  Keynes reasoned the sources of these shocks might be so-called animal spirits—broadly experienced surges of ultimately self-fulfilling commercial optimism and pessimism, for example.  Later business-cycle theories added microeconomic foundations to their macroeconomic models and included several other likely sources of aggregate shocks, including, for example, technology shocks, money-demand shocks, financial crises, and policy shocks—think, excessively tight monetary policy or excessively protectionist trade policy, for example.  In any case, although no two business-cycle theories are exactly alike, no theory predetermines the lifecycle of an expansion.  In principle, the current expansion is older than most; it may or may not be old.